What a wonderful evening I just had.  I had been rather stuck in my writing in that many of my feelings have been rather negative lately.  This has both the problems of knowing that nobody really wants to hear it, which takes a little wind out of your sails, and knowing that there is nothing very constructive in that, for me, or anyone.  This evening was the Thursday night dirt crits, a racing series that I had taken very seriously for many years. A great deal of my friends, both dirt crit friends and friends from other places are there.  2015 was the year of some of my best athletic performances of my entire life at these events.

There was an interesting contrast between tonight’s evening and the last time I showed up there a couple of weeks ago.  The time previous had felt rather hollow. What were the differences?

Tonight’s event was taking place with storms and lightning all around us, but never quite hitting us, as the radar had correctly predicted.  Riding the deep dark woods in this stormy evening with the sunset just barely peeking out from under the gloom in the distance made my ride feel like a dream.  A good and exciting dream. I started in the back of the race, as I am not really racing and need to stay out of people’s way in order to keep being allowed to participate in these things.  Normally, I just ride behind for a lap or so and just pull out. Now, for more than fifteen years, there has been a man by the name of Mark Grumke, who everyone loves. He races at the back of the pack, but loves it just the same.  He is quite competent, just slow, and fine with that, always has been and always will be. During my lap at the back of the race tonight, I was of course riding with Mr. Grumke. Well, we seemed to be about the same speed, which means…..RACE ON!   It’s fun, no matter who, or how fast.

More importantly, the last time I was there, I was a little too concerned with trying to connect with past racers and trying to stay relevant, acting and talking as if it was a couple of years ago, and I was still one of the top racers.

Tonight, I had a short, but good time in the woods, in an eerily beautiful setting, and then just hung out.  I wasn’t concerned about hanging with anyone in particular, I was not seeking out the cool people. I had a rather good time talking with some rather small children.  The most important difference was that I was not trying to accomplish making my presence known, or making any kind of a mark. I was simply feeling the love of friends, as it happened, while not trying to make it happen.

Later, my buddy and I skidded up to the top of the levy and watched the lightning show in the last of the day, in that cusp between twilight and full night. 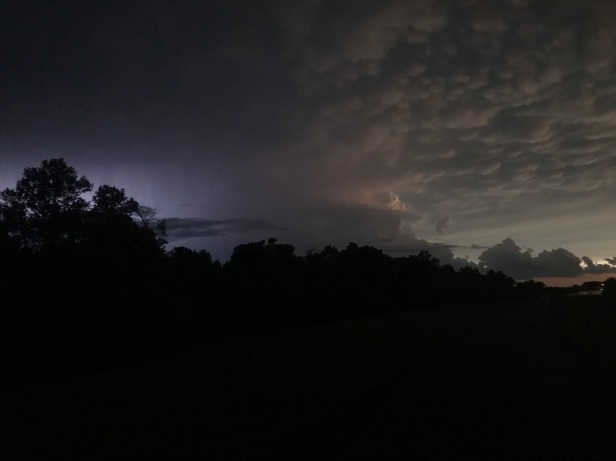