Dad was on a mission. It was 1972, the oil crisis had just gotten underway and dad was determined to drive from St. Louis, all through Alaska and back. The man loved to drive. Before setting out, he went to Sears Roebuck & Company and put four new tires on the car. They were guaranteed.

On very long drives, such as to Alaska or Mexico, Dad would put the back seat of the station wagon down so that a full-size mattress would fit in. Three or four of the six of us could then sleep as others took turns driving. The fit was so tight that you felt as if you might pop up in the air. A wee bit of a problem, being the youngest, was that I would sometimes wet the bed. While this was terribly embarrassing, I did notice that it bought me some extra space. It was a tempting tradeoff.

We had just made it into Alaska when the tires started to blow. Dad was mad. They were guaranteed! They explained to him over the payphone that he would have to bring the tires back in to collect on that guarantee. “No, I’m pretty certain that we don’t have a store anywhere close to… Fairbanks?… You don’t say… N-no, I really don’t know how far that is from St. Louis… Oh… Well, who would’ve known?” came back the voice over the phone, and thus, the lashing of tires onto the outside of the car began. 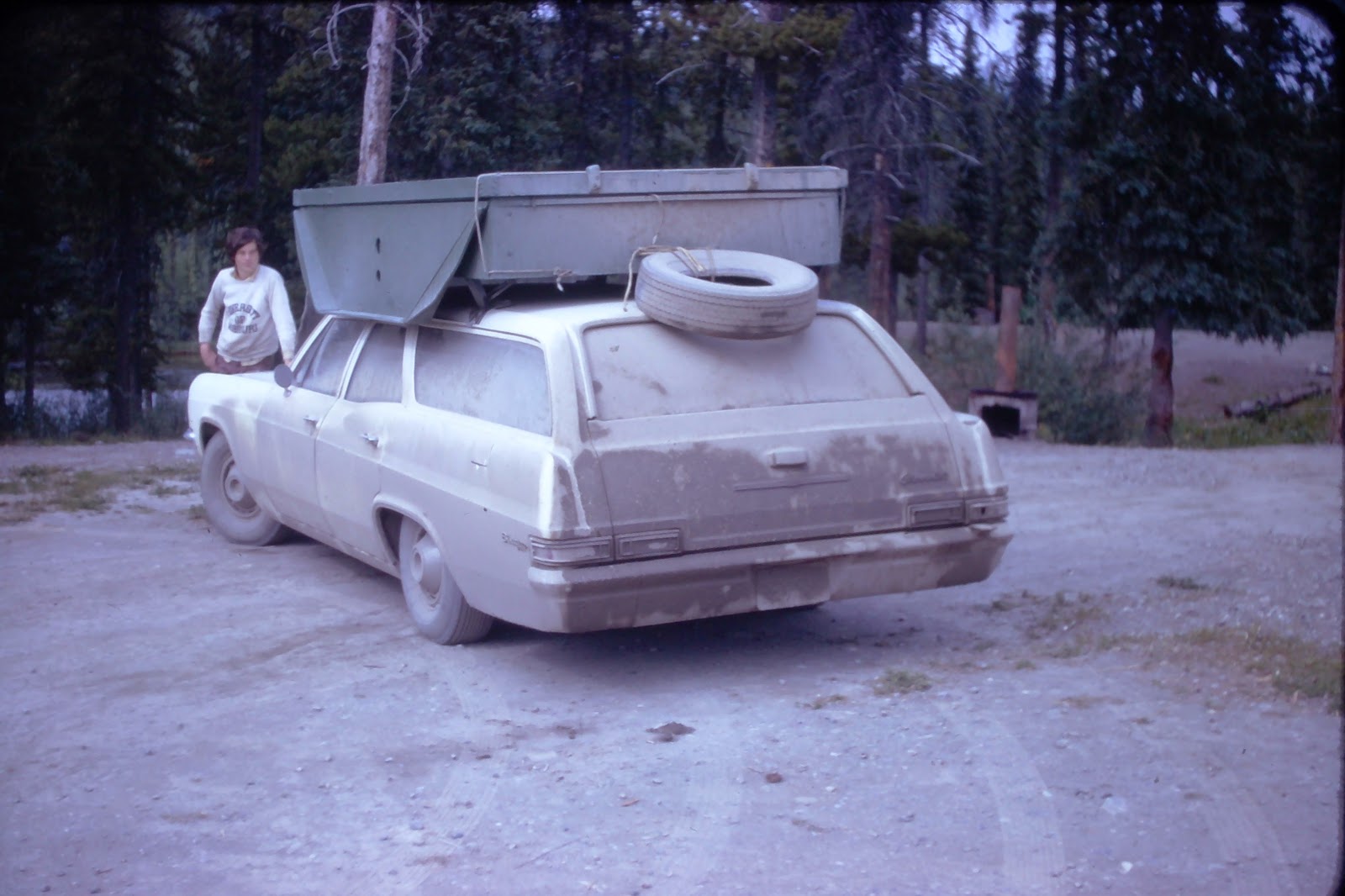 It started on the back, then more were added to the front. It was difficult to embarrass this man when he was angry about being sold “four pieces of junk”. This created a new opportunity for us kids. Alaska is full of beautiful rocks. We found that we could stash our collections inside the tires, and dad wondered why the car kept getting lower and lower. “Damn overload shocks they sold me must be pieces of junk too” I think he might have muttered. We were happy.

(The following continuation is a story that I had already posted long ago) One of our camping stays was near the water, not too far from the end of the Mendenhall Glacier. Though truly magnificent, it was wet, with a cold drizzle that never once let up the entire time that we were there. 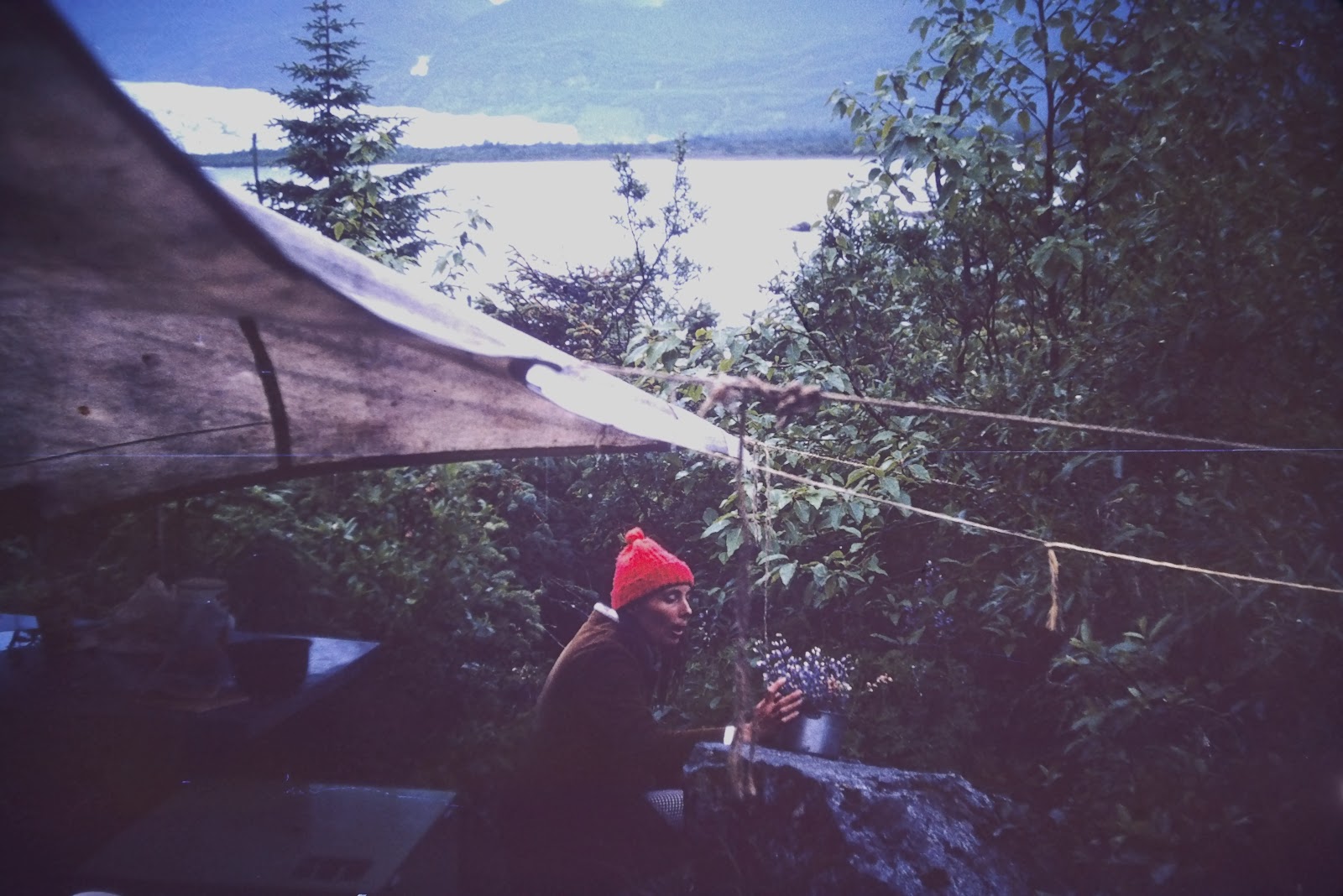 Back in 1972, the Mendenhall Glacier used to dump large amounts of ice directly into the water at the end of its long fjord. The shore of the lake was made up of rounded and polished granite rocks much like you would see in a bin at a gem store. Slowly floating by, was a small iceberg the size of a pig, minus the legs. It had probably calved off of the glacier in the weeks prior. My father was explaining to me that this ice used to be snow in the mountains thousands of years ago. As a young boy of about eight, this excited me.

A grand idea popped into my head. “If we capture this iceberg, we could make iced tea with 1000 year old ice.” The trouble was, the iceberg was about 50 feet off shore.

In the continuing progression of grand ideas, we took our camping hatchet and tied a small laundry rope to the handle. I held the coil of rope, ready for release, as dad threw the hatchet to spear the iceberg. Just as dad threw the axe, the end of the rope that was tied to the hatchet slid off the handle and fell to my feet. We waited breathlessly, staring silently and dumbfounded, knowing that things were now out of our control. Low and behold, dad made a direct hit! So there we stood, staring at an iceberg with our camp hatchet buried in it with nothing else to do. Each of us boys, dad included, made an attempt to wade out to it. Being that the water was 32 degrees, none of us made it past ankle-deep. After a while, it didn’t take too long for dad to proclaim “Oh well, we’ll buy a new hatchet at the next town.”

Upon returning to the campsite, we regaled Mom with our story. Mom, having grown up during the Great Depression, was annoyed at the waste of money and

the loss of our hatchet. She went to the shore, surveyed the situation, rolled up her pants and waded out waist deep to the iceberg to retrieve the hatchet. Her lips were blue, her teeth were chattering and her words were not completely pleasant. After handing us the hatchet, she returned to the campsite, leaving us with a little shame in silent contemplation of our failure.

After some time had passed, we thought to ourselves “Hey, we’re rugged Alaskan men. We’re not going to let a little hardship stop us from attaining our goals.” So we tied the laundry rope to the hatchet once again, only better this time. We took up our positions, learning from our past mistake, and Dad once again threw the hatchet at the iceberg. Another direct hit, this time with rope still attached. We slowly pulled our bounty in from the lake, chopped off some loot and hiked back to the campsite. Mom was sitting in the light drizzle, still with blue lips, wrapped in a blanket. I tried to lift her spirits by making her iced tea with 1000-year-old ice. I could sense that she was torn between “Thank You” and “The last thing I want is iced tea,” but she took the cup, feigned a blue-lipped smile, and drank her 1000-year-old tea.

4 thoughts on “Alaska Or Bust”