Occasionally, something good happens that is worth repeating, so you do, and then after a while, it becomes a tradition.

It seems that every time Mary and I fly somewhere, either together, or better, when one goes to visit the other, the plane gets in very late at night.  I suppose it’s because we are always flying out after work.  The tradition that Mary and I stumbled on, without any planning, involves finding a hang out bar with local flavor and having a couple of drinks before bed, often around midnight.   Our very first occurrence, the one that kicked it all off, was when we were in that new and exciting stage of puppy love.  Mary came to visit me on one of my long jobs in Red Lodge, Montana.  Her plane got in around midnight and we were headed to bed for a long weekend of hiking, etc.  We decided it might be a good idea to stop into the local biker bar just to get reacquainted with each other.  We were new.  This large and apparently famous bar happened to be on the road to the Sturgis biker convention which was being 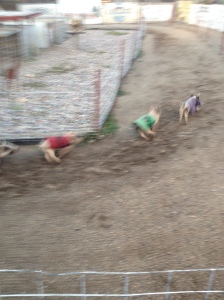 held the next week.  It was rocking and rowdy.   We sat at the bar with Mary still in her work clothes while talking, swaying and smiling at each other for hours.  The world around us slowly turned into a fairy tale background.  At one point I remember somebody punching a guy very near us.  We barely took notice, it didn’t involve the two lovebirds and they worked it out somehow.   We were in frontier cowboy country, yeehaw!   The next day I bought her a cowgirl shirt complete with rhinestones and glitter.  It seemed like a good idea at the time.    Next day, baby pig races.

Another memorable, new city kickoff, was on a trip to West Texas near the New Mexico border for a wedding.  There was a big  event in town that weekend and the only hotel available was, apparently, on the rougher side of town.  After checking in and asking the desk for directions to a local late night bar, we were off.  I am pretty sure that we did not find the place he sent us to.

This bar/ dance club was frequented by every ethnicity imaginable, except ours.  It didn’t seem to matter as we were treated well.  People were scantily dressed and letting it all hang out, which made for an interesting show when they were dancing.  Nobody was bashful in their jiggling.

The music was so loud that it started to hurt my ears so I reached for a napkin to shove into my ears.  I couldn’t find any.  It appeared that there was nothing in the place that was not bolted down except for the drinks that you bought.  No problem.  I simply said to Mary “I’ll be right back, just going to the men’s room to get some paper”.  When entering, I discovered that the men’s room was packed, but nobody was using it for it’s designed purpose.   I don’t really have a clue as to what they were doing, but my “Spidey Senses” were telling me to get the heck out of there, so leave I did.  On returning to the table, I discovered that Mary had already acquired a large lady friend who was trying to get Mary to buy her drink.  I’m not sure I’ve ever seen Mary more happy to see me.   We actually had fun and were very glad that we went to the place.   We were not planning to go back.

Some of these posts have real meaning to me, and some are just silly little stories from the past. I think that some of the better ones are: "An Unfortunate Announcement".............. "Frei Family Adventures".......... "Frei Christmas Traditions".......... "I Have to Become President of the United States"...
%d bloggers like this: