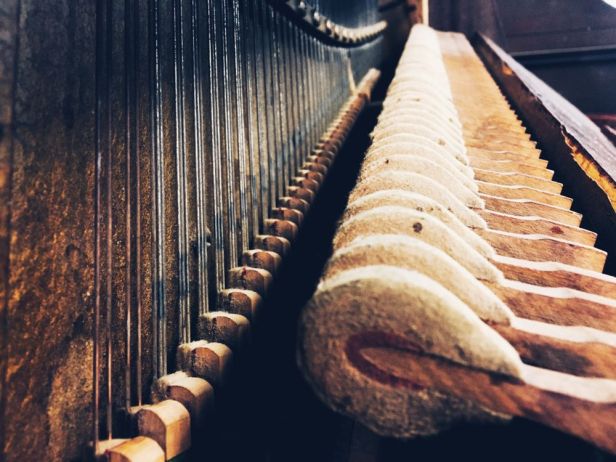 Beautiful sounds were coming out of the upright piano in the back of our family room. The poor old thing was wedged between the toys and the junk. Though our house in the woods was of average size, everything in it was a tight fit. Our mother was a collector of things. The piano had belonged to my grandmother’s piano teacher. Further back in time from that was unknown to me.
It seemed to magically stay in decent tune and produced a sound much grander than its appearance which was a pretty low bar as many of the keys were missing their ivory and had been repaired with various miss matching materials. Some of them were simply glue on the underlying wood. I always wondered how someone could play a nice piano. How would you keep track of where you are in such a homogeneous sea of white.

There was no particular song coming out of it, just a beautiful procession of chords that were strung together. My brother Chris was very musical but he was not interested in learning any particular song portfolio. He just wanted make up and play the things that sounded good to him, and that he did, with great skill and sensitivity.

As a child I would pull up a stool, open the lid on top of the piano and stick my head inside to get the full sound while watching the felt hammers rhythmically striking the strings. They would dance up and down the scale, often in pairs, trios and entire troupes while keeping a somewhat predictable distance between the dancers. You actually could see the melody. Each hammer would strike three strings, except for the lowest notes witch had two very fat strings each. The highest and lowest notes were the extremists, good for making a point, on occasion, but never very pleasant. I never tired of this as I got older. I just no longer needed the stool.

In our ever increasing exposure to professional products we tend to lose appreciation of the complexity that goes into music, and our ability to compete with this standard slips out of our grasp prompting fewer people to try.

One thought on “Peering Into The Piano”