I’m not sure if I ever actually believed in Santa Claus, but at a very early age I decided to take a stand!  I proclaimed that I knew, beyond the shadow of a doubt that there was no such thing as Santa Claus!   Now my brother Mark had a very straightforward way about him.  A way that I found to be amazingly effective.  He simply said, “well, if there is no such thing as Santa Claus, I guess there is no reason for you to be getting any gifts anymore”.   Wow,  problem solved!  I just got a complete lesson in how to work in politics.  I still didn’t believe in Santa Claus, but by golly, I had both ores in the water now!  “I just love old St. Nick, yes siree”,  at least until Christmas is over.  I did appreciate Mark’s succinct directness.  When others were tasked with getting me to eat something that I didn’t like, they would try reverse psychology, advanced child neurodevelopment theory, etc.   Mark would just take a large spoonful of mashed potatoes and say “See these potatoes?  They are going in your face.  You can open your mouth if you want to, your choice”.

Our Christmas Holiday season was steeped in old tradition that was not going to be tinkered with; no one wanted to.  We had antique hand carved, dark wooden figurines depicting old German holiday scenes.  No Santa Claus.  It was very traditional.

One of the biggest steps towards Christmas was getting the tree.  This was an all day affair.  We would drive down to a private farm in the woods of Pevely, Missouri in mid December with our family friends, the Hippes.

My parents were determined to get just the right tree.  I don’t know how it came to be so important to them, but it was.  To make matters tricky, there was much disagreement as what constituted the perfect tree.  My mom deferred many decisions in life to my dad, but NOT Christmas, damn it!  We would spread out and wander through the woods of pine trees all day long.  When someone would find something promising, the scurrying about of trying to find and collect the clan would ensue.  Once gathered, we would all stand around, discussing the relative attributes and faults of the poor thing.  We could be brutal.   One tree would be perfect in one department while sadly disappointing the judging panel in other areas.  We liked large, thick, full trees with lots of “character”.

After many hours, the search method employed by us kids started to look a little more like games of hide and seek and snowball fights.  It is important to put yourself in a happy mindset in order to be open to recognizing the “perfect tree with character”.

Luckily, mom always brought a large thermos of hot chocolate, and this was not that chocolate drink crap you might find at the store, this was steaming hot real milk with ample amounts of Hershey’s chocolate syrup mixed in.  Strict rationing protocol had to be put in place.

Every year, the routine unfolded invariably the same way.  We would wander and argue until it started to get dark and cold, then, suddenly, many trees developed the character that we had been searching for.  Then, and only then, in the shivering cold, we had our tree!  We would saw it down and tie it on the top of the car, which was no small feat as we always got the biggest damn tree that we could fit under our vaulted ceiling.

Our Christmas theme was all about anticipation.  We did not play our favorite music in the weeks beforehand.  Except for some very traditional fare like the hand carved figurines and holiday nuts, we did not decorate beforehand.  We knew that joy was coming.  In Sunday Mass, I would count down the advent candles on the wreath that hung by the altar.  A whole week for just one more damn candle.  Every night, a different child would get to open one more window on the advent calendar, revealing some traditional or sparkly winter scene.  Things were starting to get real when “The Grinch Who Stole Christmas” came on TV.  Possibly the best film ever made.  The typical Christmas season that I witness these days is more of a celebrate as you go affair, very festive, but perhaps a bit lacking in mystery.  Mystery and anticipation is often better than the actual thing itself.  It is much longer lasting.

St. Nicholas Day:  The evening of December 6, mom would set us all down with pen and paper just before bedtime.  We were to write down our Christmas wishes for St. Nic to collect in the middle of the night.  Poor guy racked up a lot of frequent flyer miles.  We were cautioned that these were only suggestions and that we may or may not get what we asked for.  I guess St. Nic had budgetary constraints just like the rest of us.   Milk and cookies were then set out as a thank you, and to contribute to St. Nic’s obesity problem.   The next morning always greeted us with a half drank glass of milk and cookie crumbs.   He came!

One year, I kept a notebook by the television set.  Every time a commercial would come on, I would simply write down every toy that was being sold.  This way I would maximize my haul.  Hey, the way to success is paved with preparation.  The list grew pages long.  On the night of December 6, I could not find my dang notebook.  I searched everywhere.   It looked like I was going to have to wing it.  I sat down, thought real hard, and couldn’t remember a dang thing.  I hadn’t been thinking about what I really wanted.

Christmas for us really started on Christmas Eve.  It was then that we would start to really decorate the place.  Pine sprigs would be distributed along every upper shelf and overhang.  In the afternoon, we would bring the tree into the house and set it up.  The tree was so large that we would have to push, pull and shove it through the door.  One year we broke one of the glass panes.  We would then tie the tree to the walls as a standard tree stand was no match for this thing.   It was at this point that everyone would notice and revisit all the trees faults that we had somehow forgotten while shivering in the cold.  We would stand there shaking our heads slowly back and forth, while jockeying for position for the finger pointing rights as to whose idea it was to pick this tree anyway.   After the shock wore off, dad went into fix it mode.  Exactly at that point, the protest period was over and it no longer mattered whose fault it was.   Dad would get a large drill from the shop, others would find pine branches from some tree of a similar species. He would then drill holes in the trunk and add branches in the places deemed too bare.

It truly felt like Christmas had arrived when evening fell and mom put on the record of “Tennessee Ernie Ford, Traditional Christmas Songs”.   I felt like Christmas couldn’t be Christmas without the beautiful baritone voice of old Tennessee, complete with orchestra and female backups.   As soon as the needle hit the scratchy record, mom would bring out egg nog for each of us, complete with powdered cinnamon.  This, in some ways, was the best of it all, a crescendo of excitement and anticipation.

In later years, as an adult, but before my mom came down with Alzheimer’s, I longingly asked her about that record and if I could copy the wonderful songs so that I could recapture my youth.  She said “that old dime store thing?  It was so tacky”.      I staggered around the room for a bit.  The rug had just been pulled out from under me.   After regaining some composure, I decided to take the healthy adult approach to the situation.  I pretended that I did not hear that… la, la, la, la.

The last thing to do before bedtime was to hang our Christmas stockings in mom and dad’s bedroom.  By that time we were all belching eggnog with a cinnamon afterburn.  Dad had drilled hooks into the brick fireplace, one for each family member (parents included).  Every year, dad would try to increase his return by choosing moms double legged pantyhose for his stocking.  Mom didn’t seem to appreciate it very much (I think she was a little larger at that time).  It never seemed to get old.  Boys are so dense.

I was so excited that I couldn’t sleep.  I could feel my heart pounding as I laid there.  Eventually, sleep did take over.

Upon waking, I found the tiny Charlie Brown sprig of a tree that I had put on the table in my bedroom had been decorated.  How did mom do that? 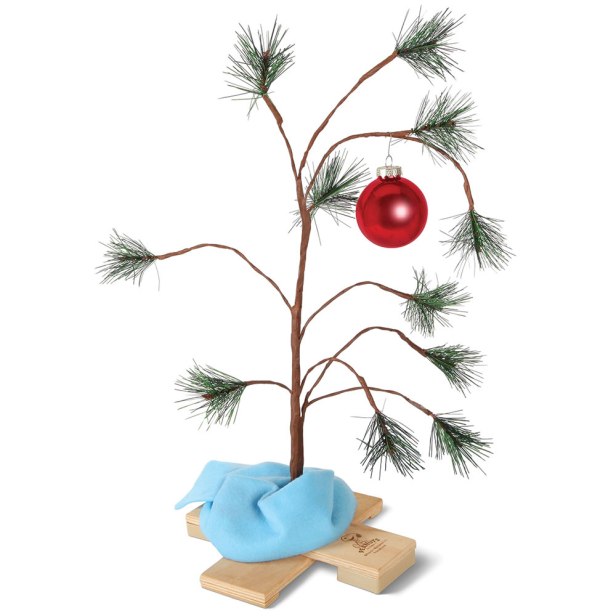 The big morning had a very well defined procedure.   We were not allowed to leave our rooms until Mom and Dad gave us the official OK.  Problem was, they were such sleepyheads on Christmas morning.  Every ten minutes or so, I would call out “Mom”, to which we kept getting the groggy reply “not yet, go back to sleep”.  As I got older, I started to appreciate how patient they were.  When the official green light was given, I must have resembled a puppy bouncing around the room.

The main haul was laid out for us in the living room, including the newly decorated tree, but first, we would go into mom and dad’s room to take our stockings off the fireplace.  This time was an interesting revelation in human psychology.  Our stockings were stuffed with mostly small and inconsequential items.  Matchbox cars, a tangerine, assorted little goofy things, but this was the most magical time.   This was a time in which you could not be disappointed.  We had no stocking expectations.  Everything that we pulled out of that stocking was purely a bonus.  I feel that this a huge lesson in life, one that I have alluded to in numerous previous blog posts.  Expectations can sometimes get in the way of enjoying life.

Following is one of the Tennessee Ernie Ford Christmas album songs that, though silly, typifies my love for some of the birth of Jesus aspect of Christmas: